It’s 7:18 p.m. We near the end of Day 2 of a nation-wide lockdown. From my window I can hear the crash of the Atlantic, a dog barking, the occasional car. Usually, as the sun sets in this town of nearly 10,000 in Galicia, Spain, children play in the football pitch that faces the beach. Their parents sit on a low stone bench on the sidelines, gossiping, rocking baby strollers.

Usually the sound of their voices rises up the hill to the house where I live overlooking the town below. Usually my neighbours walk along the path above, greeting one another in Galician. Sometimes they ask me to pick them some lemons from my tree. Usually glasses clink in the cafés lining Rúa de Montero Ríos, espresso machines hiss. It’s that time of day between siesta and dinner, time to meet with friends, to take a walk, to do some shopping. But not anymore.

Now the only children you see in the streets of Bueu are those painted on the walls.

I’m writing this blog because I’m afraid another two weeks of isolation might be too much to bear, and I might need more company than just those other solitary figures I met today in the supermarket, those who lingered a little too long in the dairy section, trying to keep a metre apart, but also trying to meet one another’s eyes, to say, Isn’t this surreal? 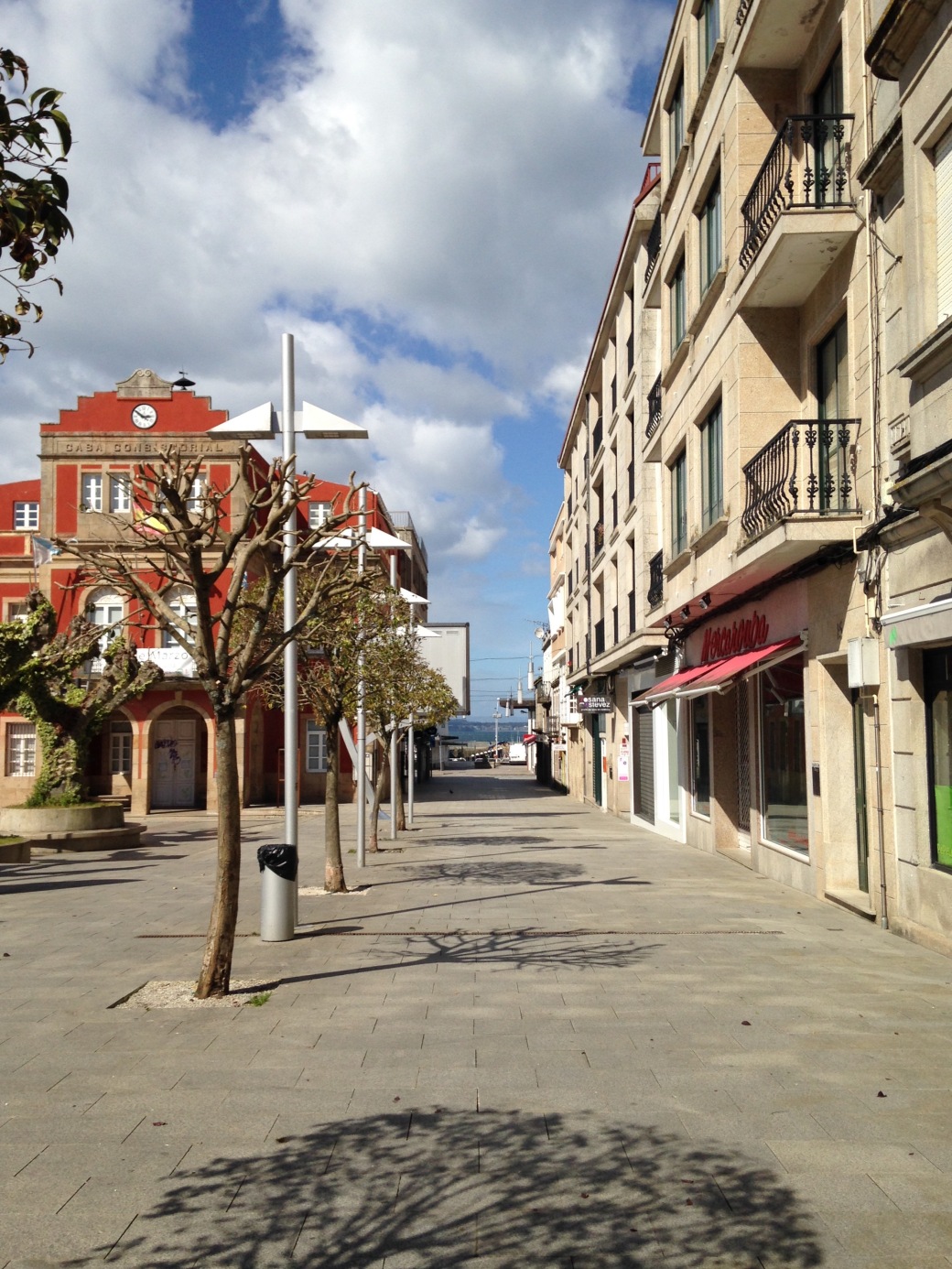 Empty pedestrian zone in the heart of Bueu, Galicia.

Isolation isn’t a new experience for me. On numerous occasions I’ve lived in what I like to call self-imposed exiles. Off-the-grid cabins in the middle of forests, thatch-roofed cottages perched on cliffs. Choosing to live in a foreign country is always its own type of exile. You are always an outsider looking in, especially when you don’t speak the language as well as you should.

But forced isolation, government-ordered and monitored by drones and police patrolling the streets with megaphones telling people to stay inside, feels altogether different. While there’s a certain guilt-free feeling in being the fully-fledged hermit you’ve always dreamed of, a 20-minute walk to the supermarket, the only place besides the pharmacy and the ATM that you’re permitted to go, changes all of that. Police tape stretches across the swing sets and slides of the playground, forbidding their use. A north wind blows a blue plastic bag along the empty boardwalk. A keening sound whistles through the masts of grounded fishing boats, a sound, locals have told me, that has been known to drive some people mad.

The off-the-grid cabin in Haida Gwaii, Canada where I lived  for several years.

Suddenly I realize I can’t go to any of my favourite haunts where the servers ask, The same as always? I can’t stop in the street to kiss a friend on both cheeks and be invited out for a glass of wine. I can’t joke around with the toothless fisherman on his blue bike, as he says Hello to me in German and How are you? in French. I can’t walk two houses up the hill to my neighbour’s house, the couple from Madrid (the epicentre of the coronavirus), and ask to borrow some olive oil.

Before today I knew these were important points of contact, but I didn’t realize they might just be essential. It’s easy for us wanna-be hermits to proclaim our disdain for humankind until they no longer exist.

Even the kiddie swings are off limits.